Giant Inflatable Terminology: What You Need to Know

An inflatable form using a continuous flow of fan-forced ambient air, as opposed to hot air balloons, or helium balloons. Cold Air Giant Inflatables are sewn together and bleed off excess air pressure by design.

The incorporation of motion into Giant Inflatables through the use of small motors or variations in air pressure or timers. An example of this is a billboard in THE THIRD DIMENSION featuring a hand holding a can. The illusion is that the hand crushes the can; then the can re-inflates to repeat the process. Various kinds of animation, including blinking lights and sound effects, can be incorporated into the many Inflatables.

An inflatable billboard extension that adds 3D excitement to typically flat outdoor billboards. These extensions are available in nearly every form.

A process of applying paint or silkscreen inks to the vinyl, using an air compressor and blowing the paint onto the material in a fine mist. It allows blending of various shades and colors as well as highlighting. Airbrushing requires a great deal of skill, and the effects offer a high degree of realism.

A turnstile door which allows access to and from the inside of Gaint Inflatables. One type of air-lock is a rotating model used as access to photographic darkrooms. It allows coming and going without letting the air escape, thereby deflating the structure.

A measure of electrical current used in rating the power requirements of an electric motor. For instance, one blower commonly used in air-blown inflatables draws 5.8 amps at 110-volts.

Air-retaining shapes similar to the chambers in an air mattress, used to create custom shapes. Bladders are used internally.

The electric device which forces cold (ambient) air into the Giant Inflatables to inflate it and maintain the firmness of the shape. The blower does not have blades like a regular house fan, but is of the “squirrel cage” variety.

A measure of air volume movement; the air flow produced by an air-moving device, such as a fan/blower,

Openable zippers utilized to deflate the inflatables at the conclusion of use.

An optional feature built into GIANT beverage container replicas (bottles, cans, etc.). It consists of an access zipper with a two-sided zipper pull which permits the installation of a beverage dispenser inside the Custom Giant Advertising Inflatables, and a small covered hole in the side of the Advertising Inflatables next to the zipper which allows a dispenser hose to be passed through the inflatables and connected to a dispenser. The final result creates the effect that the inflatables are full of the liquid being dispensed.

Double-stitched construction is used with double-needle industrial sewing machines that sew a double line of stitching in one path for extra strength and rip-resistance.

A soft-walled fabric carrying case with a zipper closure and sewn-on handles and storage pockets, used to store and transport your Custom Giant Inflatables. Constructed of water-repellant, heavy-duty canvas-type material.

Single-wall fabric reinforcements used to form custom shapes and guide the natural tendency of the air to form rounded shapes. Gussets are used internally in inflatables.

A fabric tunnel or tube which connects the fan to the Air Blown Giant Inflatables. It attaches to the fan by means of an elastic cord sewn into the end of the tube which is stretched over a lip on the fan exhaust outlet.

The use of special shapes and panels sewn inside INFLATABLES to counteract the tendency of the air pressure to assume its natural spherical shape. An example of this would be a Giant Inflatable box which uses internal construction to achieve the flat sides with only slightly round corners.

These are sealed inflatables that are generally larger than five feet in overall height. Mega Sealed Inflatables offer a unique, cost effective manner to deliver big impressions at a reasonable cost in an At Retail environment.

A full-sized, free-standing custom giant inflatable portable billboard. Portaboards comes in various sizes, the most common being 14 x48 , the size of a standard outdoor bulletin. The artwork on a portaboard is changeable and removable. It allows an advertiser to take a full-size billboard and put it just about anywhere he wants, to put his message where his market is, indoors or out, rooftop or ground.

Inflatables that are designed to be inflated one time and then sealed off. These inflatables are generally smaller than Cold Air Giant Inflatables and are often used for At Retail Promotions.

Process for applying artwork using pre-cut stencils or photographic stencils. Silkscreen printing allows a high degree of accuracy and consistent reproduction of the same image. It is used to produce duplicates when ordered in quantity.

Metal spikes used to secure the giant advertising inflatables to the ground via tethers in soft earth or tarmac surfaces. Beach stakes are special-duty stakes with a corkscrew-like shape; used to anchor Giant Advertising Inflatables in soft surfaces or beach sand. (Also known as sand anchors.)

Tarpaulin or protective ground cloth used to protect the Inflatables from soiling or damage from the ground surface. Tarps should be used when erecting Giant Advertising Inflatables on greasy-surfaced parking lots, on grass to prevent stains, or especially on sand and loose dirt to prevent the fan from ingesting debris.

Nylon straps used to anchor Giant Advertising Inflatables securely to nearby solid objects or to the ground. Many inflatables have tethers around the bottom which can be staked to the ground or weighted down. Some Giant Inflatables also have top tethers to counteract moderate winds. Tethers are usually positioned at a 45-degree angle from the inflatable.

A temperature-sensitive protective device built into an electric motor that prevents the motor from over-heating due to excessive temperatures or overloads. Most thermal protectors will stop the motor from operating and then after a cooling-off period of about 15 minutes, allow the motor to continue operation.

A hook-and-loop tape used to join pieces of material by pressing the two pieces together. The weaving prevents rips or tears from growing.

A tough, puncture resistant material made of woven nylon (called a scrim) bonded with a vinyl coating and pressure, bonding of the two materials together. The weaving prevents rips or tears from growing.

The vinyl-coated nylon material is measure in ounces per square yard. It is available in singe and double-sided coatings. The double-sided material is used when the inside of the inflatables need to have a finished surface as well as the exterior surface. Colors can be custom-mixed, as specified in the PANTONE Matching System (PMS), or they can be custom-matched to samples provided. Various metallic finishes can also be provided.

These “human sized” Inflatables are actually inflatable costumes powered by a small battery pack. These vinyl or plush costumes offer ease of use, small shipping sizes, and “air conditioning” as part of their benefits when compared with traditional costumes. 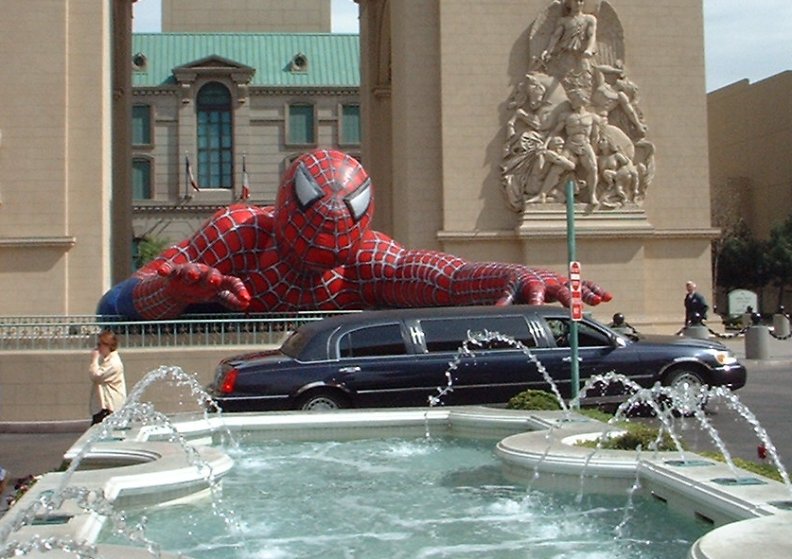